In order to organize the festival in compliance with the sanitary measures established by the government, our team makes every effort to welcome you in the best conditions and ensure everyone's safety. Application of health measures in force from August 1 (health pass) Read more
Fabrice Luchini, Renaud Capuçon, Guillaume Bellom
Nietzsche, Baudelaire and Music
- SOLD OUT -

The presence on stage of Fabrice LUCHINI, his friend Renaud CAPUÇON and the pianist Guillaume BELLOM, is in itself quite an event. The evening is further enhanced by its exceptional nature, as it is the creation of a spectacle that elegantly combines poetry and music. How lucky we are ! 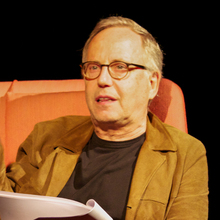 Fabrice Luchini was born in 1951. Passionate about literature and soul music, Philippe Labro spotted him and entrusted him with his first role in Don't Be Blue in 1969. Then, he played in Claire's Knee by Éric Rohmer, which made him his favourite actor, and at the same time discovered the theater by enrolling in the courses of Jean-Laurent Cochet, who transmitted to him his passion for the classical repertoire.

He published his first book Comédie française, ça a débuté comme ça with Flammarion in 2016, the story of a life placed under the sign of literature, for which he received the Coupole award.

But Fabrice Luchini is above all a theater actor who gave life to the texts of the greatest authors, from Samuel Beckett to William Shakespeare, including Gustave Flaubert, Sacha Guitry and Louis-Ferdinand Céline. He has also performed on stage readings of La Fontaine, Nietzsche, Baudelaire, Molière, Rimbaud, Hugo, Baudelaire, Flaubert, Cau and Peguy. On stage, he was directed by famous artists like Bernard Stora, Laurent Terzieff, Maurice Bénichou or Michel Bouquet. Born in Chambéry in 1976, Renaud Capuçon began his studies at the Conservatoire National Supérieur de Musique de Paris at the age of fourteen, winning numerous awards during his five years there. Following this, Capuçon moved to Berlin to study with Thomas Brandis and Isaac Stern, and was awarded the Prize of the Berlin Academy of Arts. In 1997, he was invited by Claudio Abbado to become concert master of the Gustav Mahler Jugendorchester, which he led for three summers, working with conductors such as Pierre Boulez, Seiji Ozawa, Daniel Barenboim, Franz Welser-Moest and Abbado himself.

Since then, Capuçon has established himself as a soloist at the very highest level. He has played concerti with orchestras such as the Berliner Philharmoniker under Haitink and Robertson, the Boston Symphony under Dohnanyi, the Orchestre de Paris under Eschenbach and Paavo Järvi, Philharmonique de Radio France and Filarmonica della Scala orchestras with Chung, Orchestre National de France and Gatti and Gergiev, and the Simon Bolivar Orchestra and Los Angeles Philharmonic with Dudamel.
Recent concerto engagements include concerts with the London Symphony Orchestra with François-Xavier Roth, Chamber Orchestra of Europe with Jaap can Zweden, Detroit Symphony Orchestra with Leonard Slatkin, Los Angeles Philharmonic with Matthias Pintscher and Camerata Salzburg with Robin Ticciati.

Capuçon also tours extensively as a solo recitalist and will perform in play directs with various groups such as Camerata Salzburg, Festival Strings Lucerne and Basel Chamber Orchestra.

Capuçon has a great commitment to chamber music and has worked with Argerich, Nicholas Angelich, Barenboim, Bronfman, Yuja Wang, Buniatishvili, Grimaud, Pires, Pletnev, Repin, Bashmet and Mørk, as well as with his brother, cellist Gautier Capuçon. These collaborations have taken him, among others, to the festivals of Edinburgh, Berlin, Lucerne, Verbier, Aix-en-Provence, Roque d’Anthéron, San Sebastian, Stresa, Tanglewood and Salzburg.

Recording exclusively with Erato/Warner Classics, Capuçon has built an extensive discography. Recent releases include Bach and Vasks Concertos as conductor and soloist with the Chamber Orchestra of Europe, and Brahms and Berg Concertos with the Wiener Philharmoniker under Daniel Harding. His latest chamber music recording is a disc of Frank, Grieg and Dvorak sonatas with Khatia Buniatishvili. His recording of Fauré’s complete chamber music for strings with Nicholas Angelich, Gautier Capuçon, Michel Dalberto, Gérard Caussé and Ebène Quartet won the Echo Klassik Prize for chamber music in 2012. His compilation “Le Violon Roi” received the “Disque d’Or” and his latest recording of contemporary concerti by Rihm, Dusapin and Montovani was nominated the best recording by French Victoires de la Musique 2017 and awarded the Echo Klassik Prize in 2017.
Renaud Capuçon plays the Guarneri del Gesù “Panette” (1737) that belonged to Isaac Stern.

In June 2011 he was appointed “Chevalier dans l’Ordre National du Mérite” and in March 2016 “Chevalier de la Légion d’honneur” by the French Government.

Renaud Capuçon is appointed conductor and artistic director of the Orchester de Chambre de Lausanne, for the 2020/2021 season.

Guillaume Bellom has one of the most atypical careers of his generation, pursuing both violin and piano studies, from the conservatoire of his home town Besançon all the way to the Conservatoire of Paris. It is in this establishment that he decided to fully develop his activity as a pianist, under the influence of striking personalities such as Nicholas Angelich and Hortense Cartier-Bresson.

A finalist and the winner of the “Modern Times” prize (rewarding the best performance of the contemporary music piece) at the Clara Haskil 2015 competition, he revealed himself during that event dedicated to the great Romanian pianist, herself a good violinist as well. That same year, he won the first prize at the Épinal International Competition. The next year he won the Thierry Scherz prize at the “Sommets Musicaux de Gstaad”. In 2017, he was nominated at the Victoires de la Musique in the “instrumental soloist revelations” category. He is also an Associate Artist at the Singer-Polignac Foundation in Paris.

His discography includes two notable albums dedicated to four-hand pieces by Schubert (rewarded by the prestigious “ffff” of the French magazine Télérama) and Mozart, recorded with Ismaël Margain for Aparté, a CD with the cellist Yan Levionnois (“ffff” of Télérama), released in 2017 for Fondamenta, and a solo CD with works by Schubert, Haydn, and Debussy, released by Claves also in 2017.