In order to organize the festival in compliance with the sanitary measures established by the government, our team makes every effort to welcome you in the best conditions and ensure everyone's safety. Application of health measures in force from August 1 (health pass) Read more
Nicolas Dufetel
Musical conference
Nicolas Dufetel will offer an original presentation of the concert by Joyce DiDonato and Craig Terry by weaving intimate and poetic links between the music and the history of La Moutte, a jewel of art and memory.
Fixed price : 15€
Book
Palm grove
Access 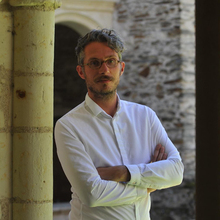 Nicolas Dufetel is a musicologist, researcher at the CNRS and deputy director of IReMus (Institut de recherche en musicologie) in Paris. He wrote his doctoral thesis on Franz Liszt, and has been a guest researcher at the Bibliothèque nationale de France. He was a fellow at the Houghton Library (Harvard University) and a postdoctoral fellow of the Humboldt Foundation in Weimar. His research concerns the 19th century, especially Liszt, aesthetics, epistemology, European culture, and the history of music in the Ottoman empire.

He is also vice-mayor for culture in Angers.